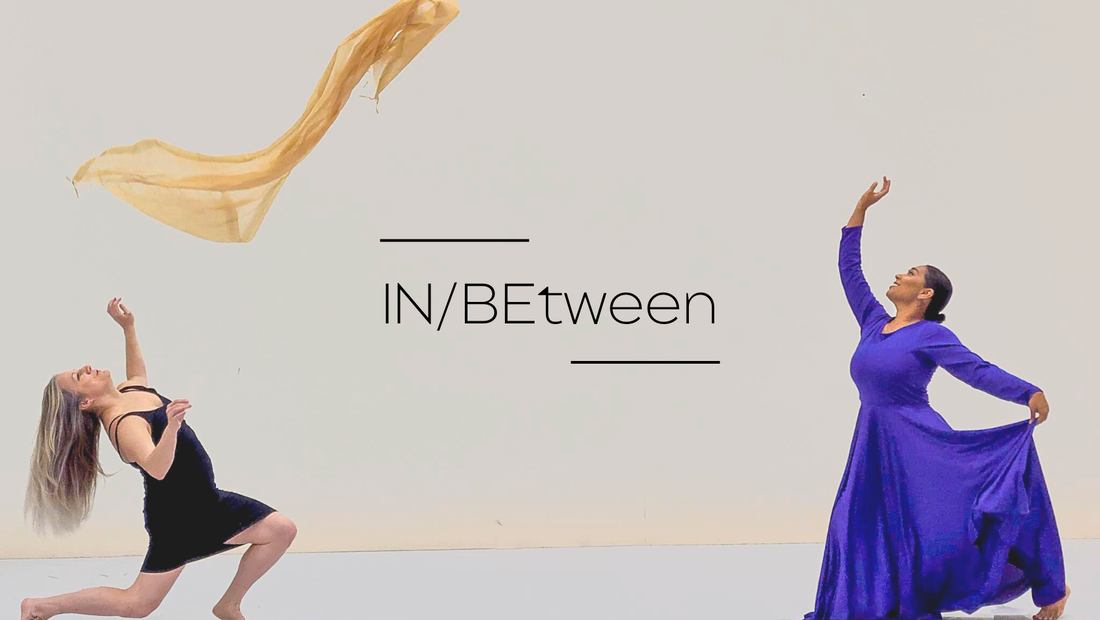 It is the duo’s goal to both entertain and educate audiences about the art forms while potentially creating something entirely new. IN/BEtween hopes to tap into the emotion of where we are in the dance timeline, hovering between the old traditions which are being lost to technology and the new generations of dancers’ creative ideas. This hour-long journey is sure to be an ebb and flow of emotion, passion, technique, and artistry.
​
This production is supported by the Heinz Small Arts Initiative.
TICKETS:
General Admission: $35
Student/Artist/Senior Discount: $20
Live Streaming (Remote/Online ticket) Saturday, December 3: $10
Can't make the show? NO PROBLEM!
This event will be recorded Saturday as part of our live streamed event and distributed for out of town ticket purchases available December 4. The link to the show will be available for one week to view.
​
Tickets available at: https://www.eventbrite.com/e/inbetween-a-collaboration-of-kathak-and-contemporary-dance-styles-tickets-429239706517
THE CHOREOGRAPHERS:
NainaKathak.com
Naina Roychowdhury Green started her exploration of Kathak in 1994 at eight years of age, as Dr. Pallabi Chakravorty’s first Kathak student. Naina’s unique style of Kathak evokes a soft and subtle restraint combined with sharp lines, crisp footwork and evocative storytelling. Her dance company, “Naina Roy Kathak” offers a rigorous Kathak curriculum in academic and group formats along with a disappearing format of one-on-one apprenticeship.

Naina is a fixture in the local, national, and international dance community. She has sparked an important discussion on arts, activism, and abuse that was the impetus for a global #MeToo movement in Kathak that has led to agents of change such as journalists and filmmakers to take a closer look at the hidden and blatant abuse that lies in the pedagogy of Kathak.

Naina has performed on international television and was featured in J.J. Tiziou’s photographic installation “How Philly Moves,” that is permanently on display at the Philadelphia Airport as well as other Philadelphia landmarks. She conducts advanced abhinaya (emotive expression) training which is a fading skill in Kathak. Recently, she has been training professional Ballet and Modern dancers at the Pittsburgh Ballet Theatre and Shana Simmons Dance.
Shana Simmons graduated from Point Park University with a BA in Dance in 2003. Simmons lived in New York City for four and a half years and performed with choreographers such as Noemie Lafrance "Agora", Alexandra Beller, Tomé Cousin, bigGRITS dance co, Debra Wanner/ Amy Larimer, Amanda Drozer, and was a company member of white road dance media. Whilst in New York, Simmons was chosen to present work at the HATCH Series twice, through Jennifer Muller Works. Simmons also taught for the Internationally acclaimed National Dance Institute, founded by Jacques D’Amboise, for three years.
Simmons holds an MA in Choreography from Trinity Laban Conservatoire of Music & Dance in London, England. She performed and choreographed with companies and choreographers such as Flat Feet Dance Company, Stacy Abalogun and Nadine Doran-Holder and independently presented work at the Reverie Dance Festival in Ghent, Belgium. Choreographers in London consistently asked Simmons to create movement for their pieces as part of their process, along with Simmons’ own choreographic works being shown. Simmons collaborated with the visual art company Artmongers, in two site-specific works in London and Simmons has performed her own works in New York City, Belgium, London, Chicago, Boston, and Pittsburgh. Simmons has presented at APAP, pearlPRESENTS Dance Festival, the Next Stage Residency, SpringUP Dance Festival, New Moves Festival, The Three Rivers Arts Festival, and Evolve Productions.

Simmons has produced a variety of works in Pittsburgh since 2012 through SSD: Relative Positions (2012), a multi- disciplinary building take over featuring over 12 commissioned artists, PASSENGER (2014), a full length work choreographed by Simmons and performed at the National Aviary highlighting themes of extinction and environmental concerns, Objective I (2015), a collaboration with The Moving Architects (NYC) experimenting with editing in dance, The Missing Peace (2018), a full length work featuring three choreographers and grappling with social issues such as Alzheimer’s Disease, suicide prevention, and struggles with self-identity, and ELEVATE (2019), a triple bill three-city tour featuring three female run dance companies and highlighting themes of female empowerment. SSD has received support from the Heinz Small Arts Initiative, The Pittsburgh Foundation, PACE Capacity Building, the Kelly- Strayhorn Theater and the National Aviary.
In 2021, the company received a major grant award through the Arts. Equity. Reimagined. application for a collaborative project to discuss race and age diversity in dance, generating discussions related to the Pittsburgh dance scene and ways of creating sustainable futures for black dancers here in Pittsburgh. Along with this new endeavor, the companies (SSD, Bianca Johnson & Dancers, Chrisala Brown, and XRconnectED) will begin documenting best practices for filming in 360-degree format, creating a new virtual work blending different dance styles, with community at its core center. The company has also created the online Constructed Sight series featuring dance film shorts from company choreographers blending public works of art and dance as well as guest artists.
Simmons was commissioned to choreograph a 2020 work for Texture Contemporary Ballet, and has set works on Indiana University of PA and Point Park University. SSD was commissioned by the VALEES Conference in March 2016 and Leadership Illinois Conference in 2017 to perform works from Objective I and The Missing Peace. Simmons has been a nominee for the Carol R Brown Award (2016), received Pittsburgh’s Best Dance award (2014, 2015, 2018) and independently teaches within the community as well as Adjunct Faculty at Point Park University.
THE MUSICIANS: 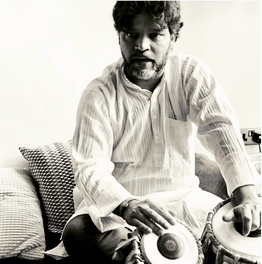 As a classically trained player, Hiren Chate's musical passion has been influenced by the Punjab, Delhi and Ajarada Gharana (or musical school of thought). Whilst deepening his understanding and practice of these styles, Hiren Chate is energized about drawing upon a range of musical genres to create new sounds and musical repertoire. His musical work and experience ranges from teaching individuals and groups; practicing the authentic approach to Indian music; collaborating with eastern and western musicians for musical and theatre productions; composing music for dance productions; and accompanying Kathak and contemporary dancers. Hiren Chate has been learning tabla under the guidance of PANDIT YOGESH SAMSI since 2006. He also had the privilege of learning the AJARADA style of tabla from late SUDHIR KUMAR SAXSENA. Hirens other teachers are SHRI DIVYANG VAKIL and his father Late SHRI RAGHUNATH CHATE.

He moved to Mumbai in 2012 to spend more time with his guru Pt. Yogesh Samsi. He also runs his own company called ‘BEAT OF A DRUM’ through which he does events, lectures on music & math’s, teaches online to lots of student’s in Uk, USA , Canada and Greece. He started a concept called “BAITHAK” in Ahmedabad where he invites artists to perform and to showcase their art form to connoisseur’s of music. They have a Q & A session after every concert so that the audience can interact directly with the artist and ask questions regarding Raga and Taal. The first such BAITHAK has also started in Mumbai by his company BEAT OF A DRUM.
CHECK OUT HIREN HERE: https://www.youtube.com/watch?v=bno6_DCnzKg

Jeff Berman is a multi-instrumentalist, improvising artist, composer, and educator whose work reflects his unique musical vision. His genre-extending concept on vibraphone, mountain dulcimer, percussion, and drums has allowed him to collaborate, across stylistic, and cultural, boundaries, with a diverse
group of artists from around the world. Josef Woodward has described his music as "worldly folk-jazz"; Jazziz magazine has written “…hypnotic vibes work…Berman not only play vibes, he sounds like he created the instrument”, the Los Angeles Times wrote “Berman bends a chord or strums his Appalachian dulcimer to stunning
effect”, and Bill Milkowski has called Jeff’s writing “…hauntingly beautiful…”. He has performed internationally both as a solo artist and as a member of various ensembles. Some of the artists he has performed, recorded, and collaborated with include clarinet/mandolinist Andy Statman, pianist Paul Bley, tabla master Samir Chatterjee (India), singer Linda Thompson (UK), saxophonist Dave Liebman, seperawa master Osei Korankye (Ghana), pipa player Jin Yang (China), cellist/vocalist/composer Robert Een, banjo-master Tony Trischka, cellist/vocalist/producer Arthur Russel, singer Pasang Dolma (Tibet), Andy Irvine (Ireland), pianist/composer Blue Gene Tyranny, and guitarist/composer/producer Matt Balitsaris, to name just a few.

Jeff music has been use for dance, theater, and film, as well as performance. He is a founding member of the group APPALASIA along with Susan Powers and Mimi Jong. In 2019 they were invited by The Smithsonian Institute in Washington DC to create music for the silent film Broken Blossom by DW Griffith. Jeff works with the dance department at Point Park University/Conservatory of Performing Arts and is a Teaching Artist with the PA State Council of the Arts, creating residencies and professional development workshops based in developing and reinventing relationships to musical Rhythm, and it’s application in performance, communication, and the art of Improvisation.