Shana Simmons Dance (SSD) was founded in 2009 by Artistic Director Shana Simmons to create unique and engaging contemporary dance. Since its founding, Simmons has used dance as a means to express other people’s opinions as well as her own: to interpret and create. She takes inspiration from the immediate world in which we are living, and her choreographic expressions are created from the ways in which our society is changing, the need for intimate connections to people and objects, and providing the viewer a unique perspective, if not participatory action. The result for the viewer is an emotional reaction or a thought process about the work. SSD projects aim to draw audiences into modern dance in new and creative ways and highlight current societal topics for project based work.

SSD began its project history in 2009, following Simmons’ graduation from LABAN in London, England. Their first collaboration was with Artmongers, an artistic company focusing on community murals and led by Patricio Forester. The company’s first two projects involved a site specific Tea Party for the local Deptford community, next to Greenwich, and a Hospital Project for the newly revamped children’s hospital wing at St Thomas’s Hospital, located in London proper. Both performance events utilized the sites in creative and entertaining ways, engaging the audience into the performance and encouraging dance as an accessible and fun form of expression. The goals of both of these performances were to bring new life into places that otherwise seem desolate or scary.

Since their relocation to Pittsburgh, PA, SSD has produced three major productions through the support of the Heinz Small Arts Initiative. Relative Positions (2012) was a building take over involving over twenty artists who performed/presented their works in site specific locations throughout. Over 250+ attendees were documented and it boasted “Pittsburgh as a vibrant arts scene.” Jane Vranish, Pittsburgh Post Gazette. PASSENGER (2014) honored the hundred year anniversary of the extinction of the passenger pigeon, once the most numerous bird in North America. Presented at the National Aviary, five dancers swept, leapt, and careened through space, transforming the center of the aviary into a feathered nest of movement. Objective I (2015) was a collaboration with NYC based company, The Moving Architects, experimenting with editing in dance. Based on an article written by Judith Mackrell, both choreographers created and edited each other’s work. Presented as a two step project, Objective I was presented in both NYC and Pittsburgh. Discussions ensued with audiences; topics of artistic voice, entertainment value, and the true nature of a choreographic work were debated.

Along with these three productions, Artistic Director, Shana Simmons, has created more than twelve choreographic pieces since 2009. Her works have been seen in London, Belgium, New York City, Chicago, and Pittsburgh. SSD also has a long standing collaborative relationship with The Eclectic Laboratory Chamber Orchestra, producing four separate works to date.

SSD strives to maintain excellence in choreographic quality, create experiences for audiences highlighting current topics, and views performance as an exchange between audience member and performer. 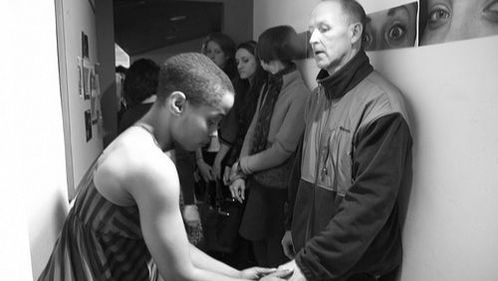 Grounded in the Soil

-performed in Pittsburgh, The Three Rivers Arts Festival and The Pittsburgh Fringe Festival(2014)

-in collaboration with clarinetist Amanda Morrison

-performed in Pittsburgh, Next Stage Residency(2012)