CONSTRUCTED SIGHT: a series of dance for films blending public works of art and dance

Shana Simmons Dance (SSD) presents Constructed Sight: Winter, an online dance for film series created as a direct response to Covid-19 which features new dance for films three times a year, plus a series of diverse guest artists. Three seasoned choreographers are collaborating on a two-weekend film venture, on site and inspired by three public works of art around Pittsburgh. The trio is creating six separate films connected in part by one work of art existing at the Wood St. T-station downtown. Each film is connected by a geometric shape featured in the work by visual artist Sol Lewitt. Other artists incorporated are Romare Bearden and Jane Haskell. The dance for films will premiere online via YouTube premiere for a two weekend run at the beginning of March, hosting both evening and matinee performances for an International crowd.

This project is currently not funded, but SSD is committed to offering this for FREE to the public during this pandemic time as accessible art is much needed in the world. Please consider a donation to cover a viewer if you are able to do so!
Alongside the Constructed Sight portion of the program, SSD is excited to present a group of eight diverse guest artists from Japan, New York City, Texas, Minneapolis, Florida, Pittsburgh, Philadelphia and a global collective founded from London. Featured artists are: 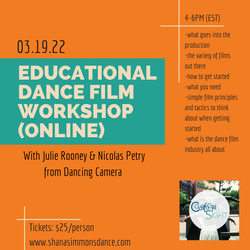 Audience member Erica Rabbin viewed the first Constructed Sight program from September 2020 and had this to say:
“I felt different connections to the sculptures than I had previously, which I had seen before.”

One goal of this series is to showcase works of visual art in new and inventive ways, to draw awareness to the art, and create a new perspective for viewing. The three choreographers decided to approach the Constructed Sight: Winter program from a slightly different perspective. Investigating the three main artworks in the free portion of the Pittsburgh Light Rail, Jamie Erin Murphy, Brady Sanders, and Shana Simmons will delve into the surrounding areas of each station downtown for inspiration based off of one shape each from the artwork “Thirteen Geometric Figures.” Each inspired individual dance for film will tie back into the one piece through architecture and other artworks. Shana Simmons Dance dancers featured in the series include: Joanna Dehler, Emily Jaikaran, and Allegra Golembiewski.

Each film runs between 3-7 minutes and is thematically based on the artwork, architecture, and history of the surrounding area within and outside each station. For example, one film might tap into the estimated price of the artwork and lack of recognition the artwork receives, featuring history of the piece and thoughtful choreography. The entire evening is “hosted” by one of the choreographers’ alternate personas, creating a fun and entertaining vibe. Each choreographer has a different approach to the works of art and the process of creating dance for film, which will be explained in an interactive dialogue and filmed introductions, displaying both art and history to a worldwide audience.

Virtual audiences can expect to see a wide variety of films each evening as the weekends run different programs and will stream seven different works during each event. ​